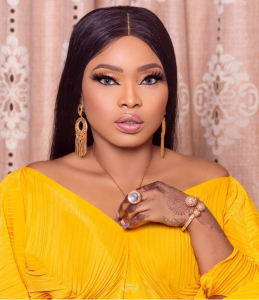 Nollywood actress Halima Abubakar and her senior colleague Shan George have picked up their never-ending drama once more.

Halima Abubakar also renewed her feud with Apostle Johnson Suleman after confirming the rumors that she had an affair with the clergyman.

Recall that controversial blogger, Gist Lover reported that the actress had a relationship with the man of God, who is allegedly fetish.

The anonymous blog exposed many names and secrets reportedly connected to Apostle Suleiman.

Halima Abubakar has come out to share screenshots of an alleged chat between Shan George and the pastor.

In the chat, Apostle Suleiman asked Shan George if Halima had any proof against her, to which Shan George responded that the actress isn’t sufficiently intelligent to possess any.

She then questioned Shan George, demanding to know why the actress was pursuing her.

Halima also noted how Shan George propagated untrue reports about her having cancer four years ago. Shan George, though, expressed regret about it.

Halima Abubakar threatened to reveal more details regarding her friendship with the clergyman.

She wrote: “God bless you all till infinity your care and love is overwhelming.. I will see you soon. God is Good. Pls be careful with friend & co workers, they love no one I use to call her mami. Why you still ffing me? Thank God I never took any thing from you. Shan you said I had cancer 4 years ago, of which you denied and apologize. Did I tell you, I don’t know where my problem is from? You calling me names again. Imagine both of you. Johnson you want war? I will give you war. Try and bring my page down. E go shock you”.