Nollywood actress Halima Abubakar has come out to reply Apostle Johnson Suleman, the founder of Omega Fire Ministries after he filed a lawsuit against her.

The clergyman had filed the lawsuit in response to the sexual allegations the actress made against him which he says is an attempt to defame his reputation.

According to the lawsuit, Halima Abubakar publicised false, malicious, and defamatory allegations against Apostle Suleman that were directed at his behavior.

Additionally, the pastor demanded that the actress issue a retraction of her statements on social media and in a few national newspapers of her choosing.

Unbothered with the suit and threat, Halima Abubakar, on her Instastory, wrote: “JS Sure see you at the court”. 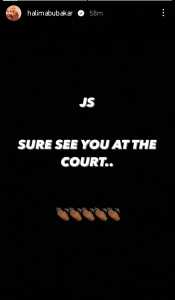