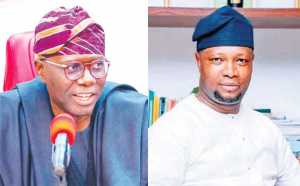 Olajide “Jandor” Adediran, governorship candidate for the Peoples Democratic Party (PDP) in Lagos, has condemned the practice of selling off vehicles belonging to traffic offenders at auction.

However, the Lagos State Governorship candidate for PDP took a stand against reckless driving and breaking traffic laws.

On Friday, Mr. Adediran and his running mate Olufunke Akindele visited two drivers whose cars had been sold at auction for traffic violations. He described the state task force’s action as “harsh punishment of taking offenders’ means of livelihood”.

Mr. Adediran and his running mate gave the  drivers, known as Lateef Kolapo and Osinachi Ndukwe, cash gifts to help their situation.

Shola Jejeloye, the chairman of the Lagos Task Force, reported on Friday that the organization sold 134 “vehicles confiscated for traffic violations” at auction.

“My role as a police officer is to carry out enforcement exercises, one of which is confiscation of vehicles for traffic offences, and handing them over to the mobile court for judgement.

“I don’t determine the fate or outcome of any vehicle brought before the magistrate in court,” Mr Jejeloye said.