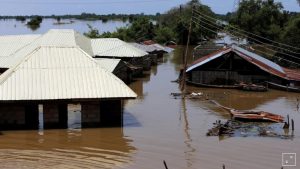 The Republic of Cameroon’s Lagdo Dam’s managers have allowed surplus water to drain from the dam.

Over 100,000 Nigerians have been displaced, 300 have died, and more than 500,000 have been impacted in the past few months due to the recent rainfall in Nigeria and the opening of the dam.

This was revealed by data provided on Monday in Abuja during an emergency technical conference on the flood situation across the nation by the National Emergency Management Agency and the Nigeria Hydrological Services Agency.

“Based on our communication with NIHSA, the Lagdo Dam operators in the Republic of Cameroon, had commenced the release of excess water from the reservoir on September 13, 2022,” the Director-General, NEMA, Mustapha Ahmed, stated while speaking at the meeting,” he said.

He added, “We are aware that the released water cascades down into Nigeria, through River Benue and its tributaries, thereby overwhelming communities that have already been impacted by heavy rainfall.

“The released water complicates the situation further downstream, as Nigeria’s inland reservoirs including Kainji, Jebba and Shiroro, are also expected to overflow between now and October ending.

“According to NIHSA, Kainji and Jebba dams have already started spilling exess water from their reservoirs. This will have serious consequences on frontline states and communities along the courses of rivers Niger and Benue.”

The states most likely to be impacted,  according to Ahmed, are Adamawa, Taraba, Benue, Niger, Nasarawa, Kebbi, and Kogi.

Additionally, he noted that some Niger-Delta states, such as Edo, Delta, Anambra, Cross-River, Rivers, and Bayelsa, were likely to witness severe flooding as a result of the region’s above-average rainfall and the combined waters of the Niger and Benue rivers as they flow into the area.