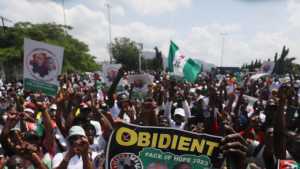 A coalition of Peter Obi’s supporters plans to organize their Lagos four-million-man march for Obi-Datti, the Labour Party (LP) presidential candidate for the 2023 general elections.
Disclosing this at a news conference in Lagos, the Lagos4Obidatti Central Organising Committee said that the march will take place on Saturday, October 1, 2022, in three significant cities.
The demonstrations will take place concurrently in Lekki Phase 1, Archbishop Vinning Memorial Church, GRA, Ikeja, and Federal Housing Authority (FHA) field in FESTAC, according to Christopher Ademuyiwa, chairman of the publicity and media committee.
READ MORE: To Keep Nigeria One, Everyone Should Be Obi-Datti Compliant – Afenifere
“This march is more like a carnival and the Obidients in Lagos are gearing up in large numbers to show their support for the Peter Obi and Yusuf Datti Baba-Ahmed presidential ticket. Also, plans have been made to have buses transport Obidients to and from their locations and the bus pickup points will be released on social media,” he explained.
Ademuyiwa added: “Our march is legal and constitutional. It is within the electoral time frame and calendar released by the Independent National Electoral Commission (INEC). All security agencies have been duly and formally informed using the appropriate means.
“The police, Nigeria Security and Civil Defence Corps (NSCDC), Federal Road Safety Corps (FRSC) and Department of State Services (DSS) will be on the ground to provide security,” he assured.