Yul Edochie, a Nollywood actor and film producer, has opened up for the first time about his rocky marriage to May Yul Edochie.

The actor made headlines when he announced his recent marriage to Judy Austin. She was a colleague, who birthed his fifth kid, a son who just turned one.

His relationship with his first wife soured after his covert marriage since she repeatedly insisted that she wasn’t in favor of polygamy, especially given her faith.
As May Edochie and Yul Edochie have reunited it appears that isn’t the case in reality.
READ ALSO: Yul Edochie Sends Birthday Wishes To First Wife, May
This was conveyed by the actor as he attacked blogger Linda Ikeji.
The blogger had written about Judy Austin’s greeting to May on her birthday.
The actor didn’t like Linda’s description of May as an estranged wife as it offended him.
See post below: 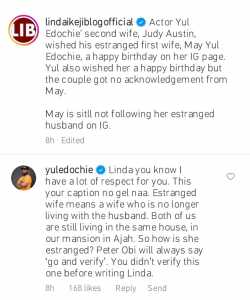