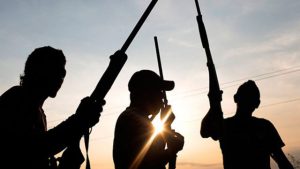 The renowned bandit commander, who terrorized the Katsina village of Batsari, was killed on Friday.

In a disturbing video that has gone viral, the vigilantes were seen parading through the neighborhood before delivering the severed head of the notorious bandit to the Emir’s palace.

Due to his operations in the Jibia and Batsari settlements in broad daylight, locals in Katsina gave the legendary terrorist the nickname “Solar.”

According to reports, Solar was in charge of the armed bandits terrorising northern Nigeria, particularly in a wide forest comprising the states of Zamfara, Kaduna, and Niger State where he has carried out an uncountable number of abductions.

In the past two years, banditry has devastated several states in the North-West geopolitical zone, including Zamfara, Katsina, Sokoto, and Kaduna.

The marauders’ evil deeds have also spread to the North Central region and other areas of the nation.

Particularly insecure is Katsina, the home state of President Muhammadu Buhari, where kidnappings for ransom by armed bandits are common.

Armed bandits have abducted many people, including school children, and killed hundreds of innocent people in the process.

Abdulmumini Kabir, the Emir of Katsina, denounced the criminal activity of armed bandits in numerous local towns around the state earlier in January.

The monarch immediately declared that the only way to end the menace of banditry bedeviling Katsina and the country at large is by “killing bandits” whenever they are caught.

“I am really troubled, so is our governor here but I am very happy now that they have been officially declared terrorists. So, you catch and kill them. That is the only solution since dialoguing with them has failed.

“How can someone kill 20 to 30 person and be taken to the correction centre? It will not augur well. If he comes out, he will go back to his old ways,” the emir, who has been speaking against banditry told vice-president Yemi Osinbanjo during a visit to Katsina.