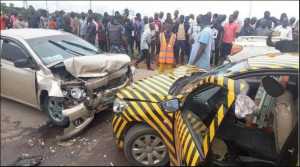 An undisclosed number of officers of the Directorate of Road Traffic Services (DRTS), popularly known as VIO, have been involved in a car crash and sustained varying degrees of injuries while in pursuit of a traffic offender at the Lugbe Bridge along Nnamdi Azikiwe International Airport Road in Abuja.

The VIO officers were driving on “One Way” while pursuing a car near the Lugbe junction when they got into the collision, which happened at around 3:10 pm on Monday, September 19.

According to reports, the officers were trying to stop a driver whose vehicle paperwork was allegedly expired by driving against the flow of traffic on the bridge, but in the process, they collided head-on with an approaching Toyota Corolla with the license plate ABJ 717 CE.

On his Facebook page, Facebook user Samuel Adekanmi Haastrup posted a video of the incident along with the caption: Some operatives of the Vehicle Inspection Office driving against traffic to apprehend a suspected offender hit another vehicle going in the right direction, ruining its front.

According to the tweep, who shared the video on Monday, the incident happened at Federal Housing Bus Stop, Lugbe, Abuja.

A twitter user, Hushiraf, said, “What a shame VIO followed one way in an attempt to arrest a golf car but luck ran against them as they heated(sic) an oncoming Toyota Corolla car! This happened at the Federal Housing B/stop Lugbe bridge, Airport road, Abuja.”

The injured VIO officers were rushed to the hospital. The two vehicles involved were damaged beyond recognition. The incident attracted a large number of passersby and sympathisers who thronged the scene and blamed the officers for the accident.

The driver of the vehicle (Abraham) who escaped death by a whisker while narrating his experience said he was ascending the bridge when he suddenly saw the VIO vehicle coming from the opposite direction at high speed. He said it was God that kept him alive considering the impact of the crash.