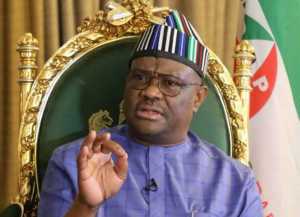 Nyesom Wike, the Governor of Rivers State, has vowed not to defect from the People’s Democratic Party under any circumstances.

The governor declared that he was more concerned about maintaining the party’s sanity and that he would continue to strive for the establishment of harmony, inclusivity, equity, and peace inside the PDP.

Wike made the announcement at the Rivers State PDP stakeholders meeting on Thursday in Government House, Port Harcourt.

The governor claimed that, in contrast to those who can’t fulfill their word and left the party at Eagle Square in Abuja in 2014, he is a man of character.

He said, “One thing I have always told people is if anybody is thinking, doing anything to think that we will leave PDP, foul.

“We will do the fight in the party. We are not like them when in 2014 they walked out of Eagle Square. They’ve forgotten. They walked out and joined APC. Is it not correct?

“Did they remain to fight inside the party? But we remained, they ran away. Now, there is a fight in the party, we will not run.

“We will fight it at this party. Those who run away from the fight are weak people. We will not. So everybody should know this is the state where we are. So that nobody tells you all kinds of stories.”

The governor insisted that the constitution of the party clearly states that elective and party offices must be zoned which should be respected.
Wike wondered why the former PDP BoT chairman will be pressurised to resign and the PDP National Chairman, Senator Iyorchia Ayu, is making excuses for not upholding his duty to do the right thing.
He said, “You have taken presidential candidate, you have taken party chairman, you have also taken the D.G (director general) of the campaign. We are talking about party politics. Decisions are made by the presidential candidate, chairman of the party and the D.G of the campaign.
“They are telling you they told the chairman of the BOT to resign. So you know there is a problem. You said he should go and resign.
“You can put pressure on him to resign when his tenure hasn’t come to an end. But you cannot put pressure on the chairman to resign. You think at our level, you will deceive us? You’ll tell us stories,” he stated.