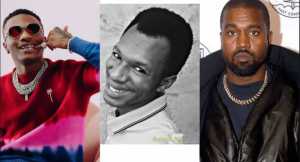 Controversial Nigerian social media star Daniel Regha, who is notorious for giving unsolicited advice on social media, has responded to Kanye West’s declaration that Wizkid’s “Essence” is the greatest song in music history.

The Grammy-winning superstar referred to Wizkid’s song “Essence” as the greatest song in musical history on his Instagram page. As Wizkid supporters rejoiced on social media, this ignited the internet.

In response, Daniel Regha called Kanye West a fraud for claiming that “Essence” is the greatest song in musical history.

Daniel tweeted: “Wizkid FC are jubilating cos Kanye West said Essence is the best song in the history of music; Lolz. Essence is not even among the Top 10 best Nigerian songs of 2020, talk more of it dominating in history. Y’all lie to yourselves a lot cos of stanship, it’s pathetic. No shades”. 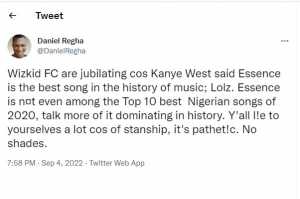