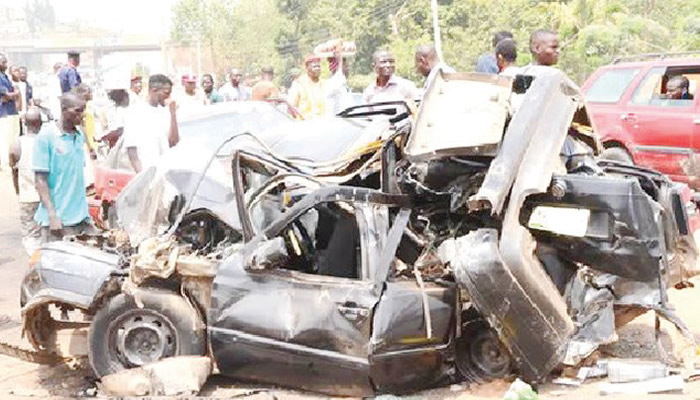 Eight persons have died while two others sustained injuries following a car crash in Plateau State on Saturday.

According to The PUNCH, the state Public Enlightenment Officer of the  Federal Road Safety Corps, Peter Longsan, confirmed the death of the crash victims in Jos on Sunday.

According to him, the road traffic crash occurred along Jos-Lamingo road on Saturday afternoon around 3:10 pm.

Longsan said, “The crash involved two vehicles, a Toyota Hiace bus and a Honda Pilot jeep. Number of people involved was 10, all onboard, out of which eight died (three adult males, four adult females and one child) while two others sustained injuries.

“The two injured were taken to the Jos University Teaching Hospital by an FRSC Rescue Team for medical attention, while the remains of the deceased were deposited at the old JUTH.

“The unfortunate incident happened as a result of excessive speed by one of the drivers, which led to loss of control and resulted to head-on collusion of the two vehicles.”

He added, “They are further advised to ensure installation of speed limiting device on their vehicles and ensure proper maintenance of their vehicles.”