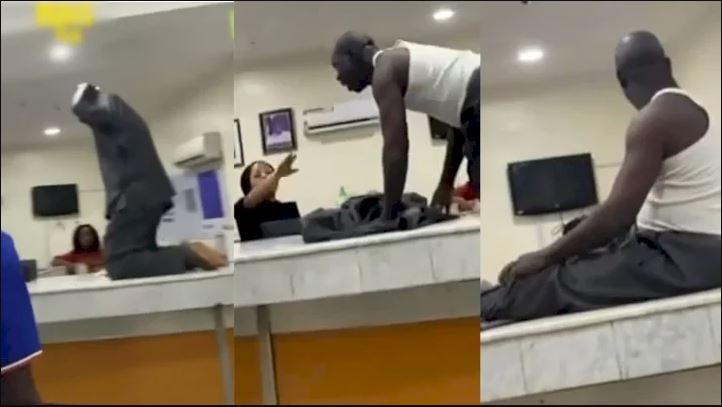 A viral video shows the moment a man stripped off his clothes in a bank after a whopping N1.5 million allegedly disappeared from his account.

The dissatisfied customer was seen in the video sitting on the bank counter after stripping to his singlet as he was being begged to come down.

He refused to come down saying that he had been debited without any justification and requested that his issue be resolved first.

The video has stirred reactions from netizens:

official_leczy: “The Man still wear the Trousers self by now na only Boxers go remain for my yansh 😂😂😂 1.5 Million for this Hardship”.

fola_pearson: “E reach to create scene in this economy. 1.5m??? Not like these banks will even come through easily if tables were turned and he wanted a loan of that amount from there, so create that scene Sir. If my 20k vanish from my bank ehn, I’d definitely create scenery sef but not in a nice way”.

_olumose: “I’m holding the manager hostage until I get my money”.

_sueldelioness: “Before nkor!!! Ahhhh do you know what it takes for a legit hard worker to save 1.5 million in Nigeria?😂”.