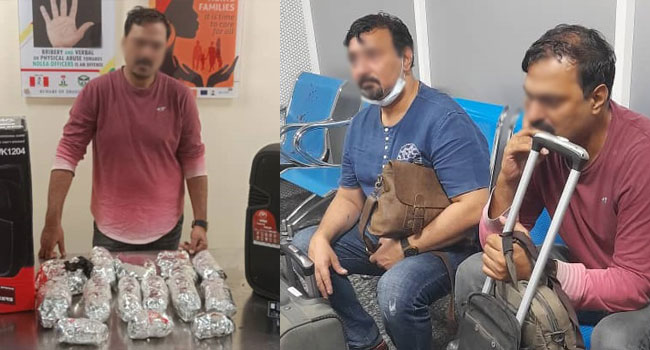 A blind citizen of the Niger Republic and two Pakistani nationals have been arrested for cocaine trafficking in Nigeria.

While the Pakistanis were apprehended at the Murtala Muhammed International Airport (MMIA) Lagos, the Nigerien was nabbed in Katsina, according to the National Drug Law Enforcement Agency.

In a statement on Sunday, NDLEA spokesman, Femi Babafemi identified the Pakistanis as Asif Muhammed, 45 and Hussain Naveed, 57, saying they were nabbed with eight kilograms of cocaine concealed in a public address system while attempting to board a Qatar Airways flight to Lahole, Pakistan via Doha.

He said “they hold Nigerian residence permits suspected to be fake and are frequent travellers to Nigeria under the guise of doing textile business. They were arrested on Saturday 5th November at the Lagos airport barely a week after they came to Nigeria, that is, Sunday 30th October.”

“Operatives at the SAHCO import shed of the airport on Friday 4th November seized 13 cartons of Tramadol 225mg and 200mg imported from Karachi, Pakistan. The consignment has a total weight of 465.10kg and 642,800 pills of pharmaceutical opioids.”