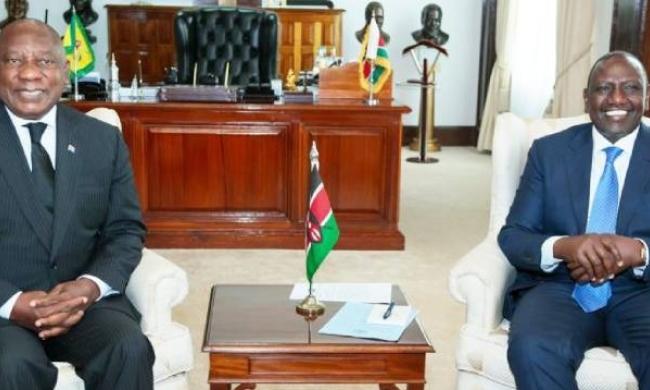 Kenyans with ordinary passports will be granted entry to South Africa, based on a new visa-free regime between the two countries, President William Ruto has said.

Kenyan President, Ruto on Wednesday said the deal was arrived at after intervention by his South African counterpart, Cyril Ramaphosa.

The new agreement is set to take effect on January 1, according to Bloomberg.“From January 1, 2023, we will have a different regime.

Kenyans holding ordinary passports will be allowed to enter South Africa on a Visa-free regime for up to 90 days per calendar year,” Ruto said.

The development means the presidents of South Africa and Kenya have resolved a long-standing visa dispute.

South Africans already get free visas on arrival in Kenya, while Kenyans were charged and required to provide proof of sufficient funds and return flight tickets.

Ramaphosa who was in Kenya on his first official trip to the country and Ruto praised the Ethiopia peace agreement signed last week in South Africa and brokered by the African Union.

They appealed to the parties to “ensure full implementation of the agreement to reach a lasting political settlement.”

The Kenyan and South African leaders also directed their trade ministers to address barriers that limit trade between the two countries.

The President said they had also agreed on a return policy when immigration laws and policies are breached.

This will help ensure that “bad elements” that try to infiltrate the states’ borders are dealt with by the policies.

“President Ramaphosa and I have also agreed to develop a sustainable mechanism to identify, monitor and resolve non-tariff barriers that limit the trade potential between our two countries,” he said.

The two nations are among the strongest economies on the African continent.

The discussion was on the condition that Kenya takes back thousands of its citizens who accessed South Africa illegally.

Visa restrictions have remained a thorny issue for the two countries for years and include Sh5,350 processing fee.

The Visas take at least five days to be processed by the South African government.

According to the report, South African nationals, have it easier getting a Kenyan Visa for free on arrival to the country.