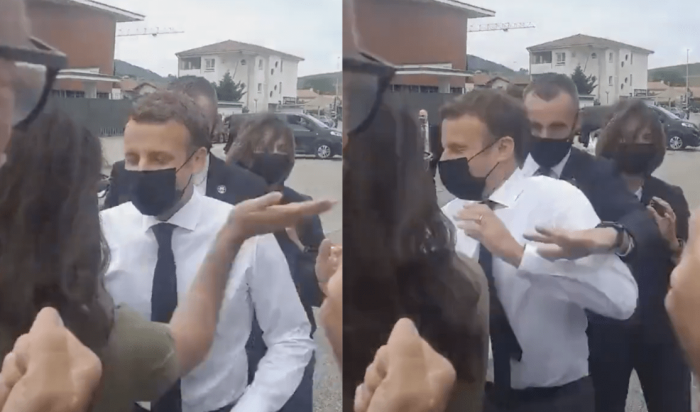 French President Emmanuel Macron has been slapped in the face by a woman.

In a video now making rounds on social media, Macron was hit by an attacker. The incident is said to have taken place on Sunday.

The unidentified woman slapped Macron in the face before officers quickly moved in and pulled the president away.

While the motive of the assaulter is not yet known, this is not the first time the French president would be subjected to physical abuse publicly.

In June 2021, a man, Damien Tarel, slapped him during a tour in southern France.

Macron was seen in the footage stretching his hands to greet a man in a small crowd of onlookers.

Rather than receive the handshake, the man, who was dressed in a green T-shirt, glasses and a face mask, held Macron’s outstretched hand before slapping the left side of the president’s face, shouting “A Bas La Macronie,” meaning “Down with Macronia.”

He could also be heard yelling “Montjoie Saint Denis”, the battle cry of the French army when the country was still a monarchy.

Tarel was subsequently sentenced to 18 months in prison.