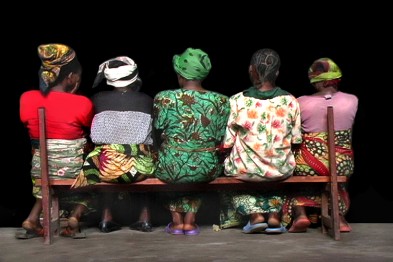 An army commander in eastern Democratic Republic of Congo has been accused of leading the recent mass rape of at least 50 women.

One of the victims, as well as sources quoted in a UN report, all accuse Lt Col Kibibi Mutware of links to New Year’s Day rapes in the town of Fizi.

There have been numerous cases of mass rape in DR Congo’s conflict but this is believed to be the largest single incident allegedly involving the army.

Lt Col Kibibi has denied the charges.
As in previous cases of rape in DR Congo, many victims are expected to keep their plight secret to avoid being abandoned by their husbands and families.

Two of them agreed to talk anonymously after medics told the BBC they had been raped.

“I was raped in front of my four children,” one of them told the BBC.

“I’m ashamed, very ashamed. If I meet two or three people who are having a discussion, I assume they are talking about me, even though it is not the case.”

The other woman was able to identify her attackers.

“It was 1900 [in the evening] and those who raped me were members of the military,” she said in a low voice, her body wrapped in a colourful cloth.

“There were four of them – Kibibi and his bodyguards. They stole all our belongings and our money.”
The 16 years of unrest in eastern DR Congo have become notorious for the widespread sexual abuse of women and young girls.

More than 300 women, men and children were raped by a coalition of rebel groups in the town of Luvungi and neighbouring villages in North Kivu within miles of a UN base in August.

He said that the soldiers who raided the town had disobeyed orders.

From an everyday fight between two men over a woman, violence escalated into a brutal punitive expedition by a group of government troops against the population of Fizi.

‘Ashamed’
“A soldier was killed here right beside the hospital,” explains Dr Faise Chacha, the head of Fizi hospital.

“That started the panic and all our patients fled. We came back at 0500 the next morning and we started taking in people who had been stabbed and others – women – who had been raped.”

Dr Chacha and the medical charity Medecins Sans Frontieres have treated 51 rape victims so far, but they expect more as women who fled the attacks slowly return home.