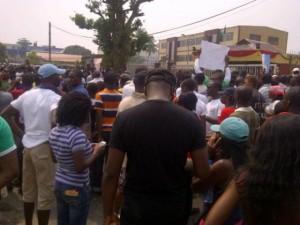 Nigerians protesting the removal of fuel subsidy stormed the office of NTA today protesting the imbalance and bias evident in NTA’s reporting of current events across the country .

They accused NTA of telling the world that Lagos had not witnessed any protests, noting that this amounted to bias.

The protesters were addressed by renowned scholar and politician, Prof. Pat Utomi.

They eventually made their way into the premises and forced NTA to record and broadcast live pictures of the protest.

Another set of protesters marched to the offices of Africa Independent Television in Alagbado, Lagos, accusing the station of biased coverage of the ongoing general strike and protests.

They threw stones into the AIT compound when they were denied entry by securitymen at the gate.

However, the spokesman of the Lagos State Police Command, Mr. Samuel Jinadu, intervened and pleaded with the protesters to calm down.