Home Lifestyle American Puts Up Billboard With The Words “All I want for Christmas...
Facebook
Twitter
WhatsApp 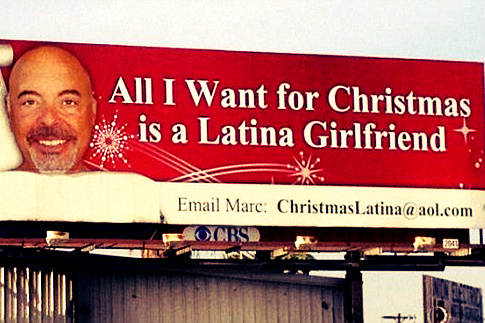 What is your Christmas wish?

If wishes were horses, beggars would ride. We thought as a millionaire, he could get a Latina girl if he wished, but La Jolla Real estate mogul Marc Paskin chose to announce his Christmas wish. As it seems, he won’t be getting a visit from Santa this year.

Paskin, who appeared on ABC’s reality show “Secret Millionaire,” posted a billboard last Thursday in a predominately Latino area of Barrio Logan, San Diego bearing the message: “All I want for Christmas is a Latina Girlfriend.”

The desperate plea for affection didn’t go over too well with some residents as reports state the day after it went up someone (most likely kids) vandalized the billboard by tearing off Paskin’s email address. His luck to find a mate ran out, as by the weekend, the entire message was gone.

There’s no word yet on who was responsible for vandalizing the billboard, whether or not Paskin will replace it or if he did find a girlfriend.