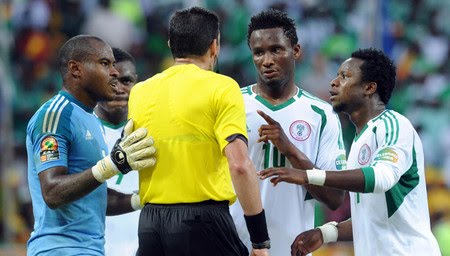 Following what it perceived as poor and questionable officiating which cost Nigeria what could have been a valuable three points at the on-going African Cup of Nations, the Nigeria Football Federation, NFF has written a protest letter to the Confederation of African Football, CAF.

Technical Committee Chairman of the NFF, Barrister Chris Green confirmed that they have protested to CAF to look into the questionable calls by referees in the two matches so far played by Nigeria.

“We’ve registered our protest to CAF. The whole thing is annoying”, Green said at the Stay Easy hotel abode of the NFF.

Meanwhile, the Sports Minister, Bolaji Abdulahi, ordered the NFF to pay the $10, 000 each to the team for the draw against Zambia instead of the agreed $5,000 for a draw.

“The need to pay them the full bonus is to further motivate the players to go all put in the final group match and win,” a top official disclosed.

Information Nigeria recalls that Egyptian centre referee Grisha Gehad six minutes from time, awarded a questionably penalty against the Super Eagles who were a goal up in their all important game against the Chipolopolo of Zambia thereby ending the game in an undeserved draw.