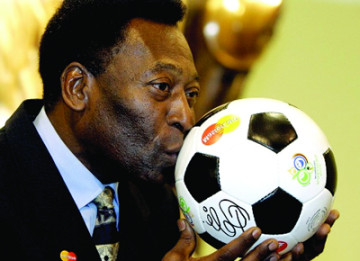 Brazilian football legend, Edison Arantes do Nascimento popularly known as Pele, is to be honoured with a life-size bronze statue which is to be unveiled in June for the reopening of Rio’s renovated, iconic Maracana Stadium.

Designed by renowned Brazilian sculptor, Victor Henrique Woitschach and weighs 300-kilogram (660 pound), the statue which is currently receiving finishing touches, is based on photographs of a goal Pele scored in Brazil’s 4-1 win against Czechoslovakia during the 1970 World Cup in Mexico.

Although the 72-year-old legend has not set eyes on the statue, It will be erected inside the renovated, 79,000-seat Maracana arena and will be inaugurated on June 2 during a Brazil-England friendly game a few days before the opening of the Confederations Cup, a dress reheasal for the 2014 World Cup.

The modeling took two days and the the process of making the statue 45 days.