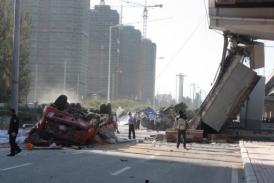 No fewer than 26 people were killed on Friday as a bridge collapsed in central China after a truck carrying fireworks exploded, state-run media reported.

The lorry “suddenly exploded” as it crossed the expressway bridge in the central province of Henan, China National Radio said, causing sections of it to collapse and sending other vehicles plunging to the ground.

An 80-metre long section of the bridge collapsed and six vehicles had been retrieved from the debris, China’s official news agency Xinhua said, adding that rescue efforts were underway.
The bridge is on the G30 expressway, the longest road in China, which stretches for nearly 4,400 kilometres (2,734 miles) from China’s western border with Kazakhstan to the eastern Yellow Sea.

Many of China’s roads are packed as the country gears up for its most important holiday, the Lunar New Year, when hundreds of millions of people travel back to their hometowns in what is billed as the world’s largest migration.

The season is also a peak period for fireworks producers, as Chinese traditionally buy the explosives to celebrate the festival, which falls this year on February 10. [AFP]