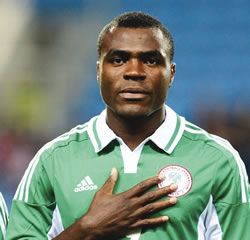 Highest goal scorer at the just concluded African Cup of Nations – Emmanuel Emenike will miss Nigeria’s World Cup qualifier against Kenya next month as his hamstring injury will keep him side-lined for 8 weeks.

Emenike, who plies his trade with Russian side, Spartak Moscow, suffered the injury during the semi-final clash against Mali in South Africa and has now said he is shocked he will be out for that long after Eagles doctors assured he would only be sidelined for two weeks.

He said, “I expected the medics with the national team to tell me how long I would be out of action, they gave me wrong information that I will be out for two weeks, but that was a lie and I am not happy with it. On getting to my team’s camp here in Spain, they told me I will be out for eight weeks after examination.”

“I should have been told right from South Africa that I will be out for this long, rather than coming to discover here at my club. It was not funny at all.

“After doing well for Nigeria at Nations Cup, my club expected me to come back and perform better and not to return with injury when I am needed.”

The power playing forward admitted his absence would be a big blow to him and his club.

“I don’t know what to say because this is a big setback for me and my club,” he said.