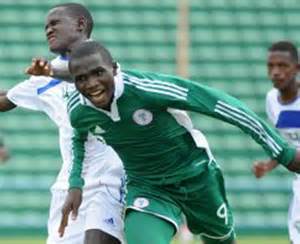 The Young Elephants of Cote d’Ivoire defeated the Golden Eaglets of Nigeria 5-4 on penalties after 120 minutes of a tightly- contested game between the two Nations.
The score was leveled at 1-1 after 90 minutes after defender Izu Omego scored for the Nigerians to be leveled by Ivory Coast’s France- based Bile Bedia.
The victory was Ivory Coast’s first victory in as many appearances in the CAF U17 Youth Championship. It will also be the second time the Young Elephants had defeated our own Eaglets in the just concluded championship after the 1-0 loss on Matchday 2.
The Eaglets took the lead after 8 minutes when Omego blasted home Nwakali’s corner kick. The Ivoirians drew level in the 27th minute through Bedia.
The Eaglets fought hard to regain their lead and in the 38th minute Kelechi Iheanacho failed to connect Nwakali’s free kick deep inside the Ivoirian area.
Earlier into the second half Musa Yahaya drove into the Ivoirians area only for his shot to find the side netting.
Eaglets’ goalkeeper Adeyinka Adewale was called into action when he saved Chelsea youth player Bekanty Angban’s goal- bound header from crossing the goal- line in the 52nd minute.
Omego went from hero to villain when he got his matching order for a deliberate elbow in the 74th minute and the Nigerians had to play with 10 men for the rest of the game.
Isaac Success failed to make the most of substitute Ahmed Umar’s corner in the 87th minute, when he had only the goalkeeper to beat. The game went into extra time and with the two sides failing to hit the back of the net after 120 minutes, went into a penalty shootout.
Chidebere Nwakali failed to convert Nigeria’s second penalty during the shootout to deny the Eaglets a third continental trophy after triumphs in 2001 and 2007.
Tunisia defeated hosts Morocco on penalties to claim the third place; all four teams will represent Africa at the FIFA U17 World Cup in the UAE in October.