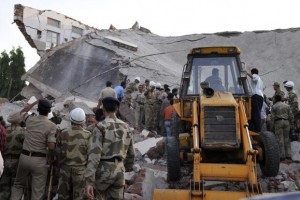 A hospital roof caved in on Friday in the central Indian city of Bhopal, trapping up to 15 people, mostly patients, officials and eyewitnesses said.

“Twelve to 15 patients are feared trapped and a relief operation is on,” Jha said, adding that rescuers had already dug out five survivors.

Debris rained on the ward’s inmates as the roof fell around 2.30pm local time (0900 GMT), trapping them, Jha said, but was unable to say how the accident occurred in the hospital, which is run by the state-owned Bharat Heavy Electricals Ltd.

“Right now, relief operations are our priority and then we will try to find out how the accident happened,” he said.

A staffer for the ambulance service said the roof collapsed without any warning and fell “in a shower of debris of bricks and mortar. It happened very suddenly”.