More fears arose for female tourists about India, as a British woman holidaying in Indian Kashmir was found dead in a pool of blood on a houseboat Saturday. A Dutch man however seemed the culprit, and has been arrested on suspicion of her murder, police said. 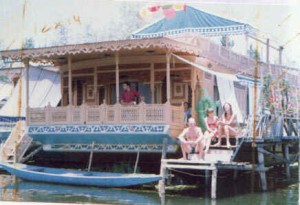 The 43-year-old Dutch national was taken into custody as he tried to flee the scenic Kashmir valley in the foothills of the Himalayas, police superintendent Tahir Sajjad told AFP.

“We walked into a pool of blood in her room,” Sajjad said. “We found a sharp-edged knife close to her body. The young lady had multiple stab wounds.”

The British tourist believed to be in her early 20s, had been staying in a tourist houseboat on picturesque Dal Lake in the Indian Kashmir city of Srinagar for two months, police said.

“The suspect has been taken into custody on suspicion of murder and we are questioning him,” Sajjad said.

Officers were investigating whether the victim had been s*xually assaulted, but the identity of the woman or that of the Dutch national has been kept from the public, but sources identify the woman as Sarah Groves.

The Dutch man who was staying in the same houseboat as the victim, was alleged to have smashed the latch door to her room during the night, after which he took a small boat to get to shore and then fled with just his passport, police said.

He was however arrested on a highway some 75 kilometres from Srinagar.

Last month, a 39-year-old Swiss cyclist was allegedly molested and robbed by six men in the central Indian state of Madhya Pradesh.

Also last month, a British woman dental hygienist suffered leg injuries when she jumped from a hotel balcony in the northern tourist city of Agra, in a bid to escape s*xual assault by hotel employees.

The death of the British woman is the latest, raising more concern on the safety of women in India, an issue which has been in the spotlight since the December fatal molestation of a 23-year-old physiotherapy student on a bus in Delhi, which sparked nationwide outrage.

The government is taking measures to ensure attacks on women end, but the efforts are proving futile, with foreigners now seeming to see India as a place where their fantasies can be fulfilled.