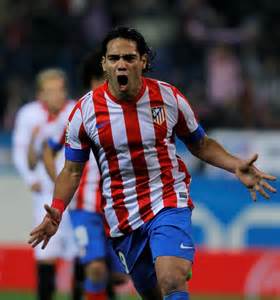 Radamel Falcao has been heavily linked with Chelsea FC but Fernando Torres insists he will stay, regardless of the recent speculations.
Jose Mourinho is yet to return to Stamford Bridge, but he seems to be the man behind the rumours linking the Atletico Madrid striker with a move to the Premier League. According to the Sun, it is believed Mourinho’s return to Stamford Bridge has a condition, that Roman Abrahamovich must free up enough cash for the ‘Special One’ to secure Falcao who has a big buyout clause in his Atletico contract.
In contrast, Torres is determined to finish the remaining three years of his contract at Stamford Bridge.

“When you play for Chelsea you’re always hoping big names come, and the big names are always related to Chelsea,” Torres said.
Torres has scored seven goals in Europe this season, his last Premier League goal was in the 8-0 drubbing of Aston Villa on December 23 and is embracing Falcao’s move without fear for the competition the deal is likely to bring into Chelsea’s attack.
“You cannot stop that, especially when the summer comes, and every top player is welcome at Chelsea. Since I came we have only signed top players, so it would not be a surprise if we signed Falcao,” the 29- year- old Spaniard added.
Despite insisting he will welcome the arrival of Falcao, Torres has been linked with Serie A side Fiorentina according to the Daily Mail; with Fiorentina striker Stevan Jovetic expected to join either Arsenal or Manchester City in the summer. The club will be hoping to secure Fernando Torres as a replacement. The club’s chief scout, Eduardo Macia, was partly responsible for Torres’ move from Atletico to Liverpool in 2007.