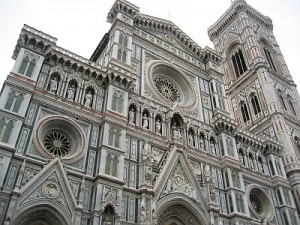 Italy is one of the most visited countries in the world. Tourists flock to its beaches, ruins, and mountains and step into a world over 3,000 years old. Here are ten places to visit in Italy:

This capital wasn’t built in a day and you’ll need an entire lifetime to see it all. With so many sites and places to see, you’ll always have something to do. Whether it’s exploring the ancient Roman forum and walking where Caesar did, seeing the Vatican, or making a wish at the Trevi Fountain, Rome is an obvious stop for anyone on a trip to Italy.

Birthplace of the renaissance and home to the David, Florence is Italy’s second obvious stop. For art lovers and foodies, Florence offers an array of goodies

The city of lovers- Venice is a great place for couples and families. Hang out in St. Mark’s Square and watch out for all the pigeons, stroll through tiny alleys, and take a gondola ride through the canals. Venice may be an expensive city but sightseeing is worth every Euro.

Five towns located on cliffs overlooking the ocean, Cinque Terra is simply breath-taking. Spend the day walking the 12km trail that connects each town, exploring there tiny streets, and stopping at little cafes. Explore the olive groves in the hills and relax yourself with a shot of Limoncello.

Sicily may be famous for the mafia but it has much more than that. Sicily has a long history of foreign domination and the result is an eclectic culture that mixes it all in. Every little city seems to have its own culture. Come and explore the countryside and well preserved towns.

Turin is a major city in northern Italy. Turin is well-known as the home of the Shroud of Turin and host of the 2006 Winter Olympics. Located right near the Alps, with the Po River flowing through the city, and villas dotting the surrounding area. Turin is trying to attract more tourists so get there before the crowds!

Capri is an Italian island in the Gulf of Naples. It has been a major resort destination since ancient Roman times and is popular with the well-to-do of the world. During summers the island sees a lot of tourists, who mostly stick to the major towns. Get out of the towns and the island is yours!

The gateway to the Amalfi coast, Sorrento is located on the Bay of Naples. It’s especially busy in the summer time but the city is big enough and has enough to offer for all its visitors. This sea port has been active for thousands of years and has a rich history. Any journey to Italy would be incomplete without a visit.

San Gimignano is a small walled medieval hill town in Tuscany. It’s famous for its medieval architecture, especially its high towers. Of the 72 that once existed, 13 remain today. San Gimignano is a popular destination for day trippers from Florence, but spending the night here will give you ample quiet time.

Visit Italy today and enjoy all the amazing cultural experiences it has to offer!