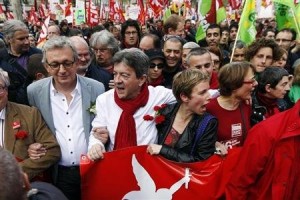 French President Francois Hollande’s first year in power has been marked with protests in Paris as tens of thousands of leftist party supporters marched through the capital city to express disappointment with the president’s reign so far.

The Communist-backed Front de Gauche or Left Front brought out people for a march on Sunday on the eve of the anniversary of Hollande’s May 6 win last year over Nicolas Sarkozy.

Most of the protesters were said to be those who had been laid off, students and unionists, as the Left Front demands the creation of a constituent assembly and the scrapping of the EU debt treaty binding governments in the eurozone to austerity targets.

Many have also gathered for separate protests in Paris and other cities to oppose the government’s plans to legalise same-s*x marriage and adoption by gay couples.

The demonstrations come with polls showing Hollande as the most unpopular president in modern French history.

Many voters are angered by an economy on the edge of recession and unemployment hitting a 16-year high.

Opponents of gay marriage have also rallied in major cities in a bid to force Hollande to back down from signing a bill approved in parliament last month.

The bill, which is also facing a constitutional challenge, sparked months of demonstrations across the country, with some descending into violence.

It has been one of the most controversial reforms of Hollande’s first year in office, with right-wing opponents demanding the issue be put to a referendum.

Sunday’s protests follow another demonstration on Wednesday that brought hundreds of supporters of the far-right National Front to the streets of Paris, as a poll showed Marine Le Pen, its leader, would come second to Sarkozy if an election were held now, far ahead of Hollande in third place.