Daughter of the late military dictator, Gen. Sani Abacha, Gumsu, says she is still mourning the death of her father, 15 years after his demise. 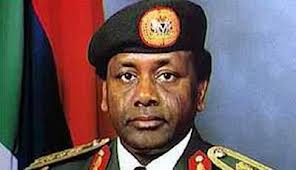 Gumsu, who may have cut short her sleep early Saturday morning, took to Twitter at 3:16 am to pay tribute to her father, saying, “I miss you so much.”

“May Allah grant my father Aljanna Firdaus. I miss you so much. Fifteen years already. Allah ya jikan ka da rhama  ‘Baba,’” she stated in a tweet.

A few hours Gumsu posted the tweet,  former Minister of Aviation, Femi Fani-Kayode, replied her, saying, “Ameen.” However, Fani-Kayode’s move to share in her grief on the 15th anniversary of the death of Abacha made a handful of his followers on Twitter to raise an eyebrow.

When Fani-Kayode’s gesture was noticed by Gumsu, she replied his tweet,  saying, “Thank you,’’ while Fani-Kayode responded, “My pleasure,  dear.’’

But Fani-Kayode’s  followers on the social service wondered if he was one of the Nigerians who subtly benefited from the Abacha regime.

“Fani-Kayode, sir, were you pro-Abacha?” one of his followers, Dolapo Bello, queried in a tweet. But realising what damage that could do to his reputation online, Fani-Kayode responded swiftly by dissociating himself from the Abacha regime.

He stated, “Of course not. I was not pro-Abacha government. I was one of those who fought his government.”

But as the day broke on Saturday, the Nigerian Twitter space was soon turned into a podium for debate with some arguing that Abacha was a hero, while others vehemently disagreed on the social network.

A Nigerian with the name, Ikhide, who tweets via @ikhide argued, “Nigeria’s democracy has seen more extrajudicial murders, state-sponsored looting, incompetence and insecurity than two reigns of Gen. Abacha. If I had to choose among Goodluck Jonathan, Olusegun Obasanjo and Abacha, I would choose Oga Jonathan, followed by Abacha, before OBJ. My father Papalolo was happier, safer and more prosperous under Abacha.’’

Segun Bamidele said, “With due respect ‘Mr. & Mrs. Death’ you have been unfair to Nigeria. You took Abacha and Abiola 15 years ago and left us with more wicked charlatans.’’

Meanwhile, some Nigerians used the picture of the late President as their Display Picture on their BlackBerry Messenger. One of such persons, who is a contact on our correspondent’s BBM,  with the name Engr L.G. Adinoyi,  wrote on his BBM,  “Nigeria needs another Gen. Abacha.’’

Reacting to the way Gumsu mourned the death of her father on Twitter, a prolific user of the social service, Tolu Ogunlesi, said, “That’s the lesson: That even the cruellest of dictators have families. And are often loving and caring daddies.’’

“Give Abacha’s list of achievements to Doyin Okupe (presidential assistant on public affairs) and Labaran Maku (minister of information), you won’t recognise the dictator again o. Bottomline is that there are no heroes anywhere, are there? Only varying degrees of non-heroism. Nigerians celebrated Abacha’s death. There were parties in Britain celebrating Margaret Thatcher’s Death. Therefore, the summary of the matter is this: All leaders are evil but some are (much) less evil than others.”

For Adelola Edema, many Nigerians praising Abacha as a hero on social media are youths who need to take some history lessons. “It’s really sad to see young Nigerians praise Abacha. It makes me fear for this country. Should the youths not be our hope for a better tomorrow,” Edema noted.

One Kunle,  tweeting via @kunledee, laments, “June 4, you celebrated Kudirat Abiola as a fighter for democracy. June 8, you now wake up to hail Abacha? Seriously? See the disconnect?”

Nedu,  tweeting via @nedunaija,  lamented, “If you tell me Nigeria was better under Abacha than it is now, that’ll be because you don’t know about the time value of corruption.

“Our inability to think is our real problem. How Abacha became a hero overnight beats me! I remember vividly, by this time 15 years ago, our street in Ijeshatedo (Lagos) erupted in jubilation, with people shouting Abacha ti ku o (Abacha has died o!”

When one Abiodun, tweeting via @biodunonline, confronted Gumsu, saying, “You and your family, return stolen wealth of the nation,” she replied, “That’s your opinion. Allah kareem.”