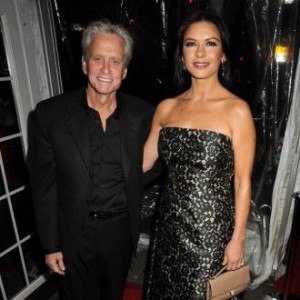 Michael Douglas believes his throat cancer was caused by oral sex.
The ‘Behind the Candelabra’ star, who was diagnosed with stage four cancer in 2010 but has been free of the illness for two years, has no regrets about spending years smoking and drinking, for which he sought treatment in rehab in 1992, because he doesn’t think it caused him to get sick.
The 68-year-old actor, who is married to Catherine Zeta-Jones, told the Guardian newspaper on Sunday (02.06.13): ”No. Because without wanting to get too specific, this particular cancer is caused by HPV [human papillomavirus], which actually comes about from cunnilingus (oral sex performed on a female).”
The actor, who has two children, Carys, 10, and Dylan, 12, with Catherine, as well as 34-year-old son Cameron, who is serving a jail sentence for drug offences, with his first wife Diandra Luker, was initially worried that stress had made him ill but now believes it was caused by a sexually transmitted disease.
He explained: ”I did worry if the stress caused by my son’s incarceration didn’t help trigger it. But yeah, it’s a sexually transmitted disease that causes cancer. And if you have it, cunnilingus is also the best cure for it.”
Michael underwent an intensive eight-week course of chemotherapy and radiation, and lost 45lbs because he refused to use a feeding tube, forcing him to survive on a liquid only diet.
He said: ”That’s a rough ride. That can really take it out of you. Plus the amount of chemo I was getting, it zaps all the good stuff too. It made me very weak.”
The actor has check-ups every six months and feels lucky that ”with this kind of cancer, 95 percent of the time it doesn’t come back”.