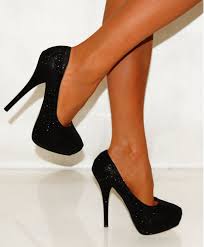 Thirty-seven percent of women admit walking home barefoot because their high heels made their feet hurt too much, a British survey indicates.

The survey of 2,000 men and women by Britain’s College of Podiatry also found 28 percent of women said they’ve kicked off their shoes to dance in a club or at a bar because of aching feet, and it takes exactly 1 hour, 6 minutes and 48 seconds before the average woman’s feet begin to ache because of high heels, the New York Post reported.

The survey found 20 percent of women said they could only take 10 minutes of high heels.

Nearly half of the women said they were willing to suffer for fashion by wearing high heels, while only 12 percent of men said they would purposely wear uncomfortable shoes.

Then again, high heels give women the optical illusion of a longer, slimmer leg, a smaller foot and greater height. When a woman walks in heels they alter her posture and gait, flexing the calf muscles and making the bust and buttocks more prominent.

However, stilettos are not meant to be worn for more than 4 hours, so some women say they carry extra shoes with them when they wear their kinky boots and stilettos, the Post said.