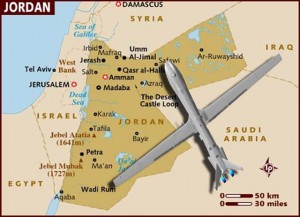 The US is considering imposing a no-fly zone in Syria, in what would be its first direct military intervention of the two-year-old civil war, Western diplomats said on Friday, after the White House said Syria had crossed a “red line” by using nerve gas.

“Washington is considering a no-fly zone to help Al Assad’s opponents,” one diplomat said. He said it would be limited “time-wise and area-wise, possibly near the Jordanian border”, without giving details.

Imposing a no-fly zone would require the United States to destroy Syria’s air defences, entering the two-year-old civil war with the sort of action that NATO used to help topple Muammar Gaddafi in Libya two years ago.

The area near the Jordanian border contains some of the most densely-populated parts of Syria, including the outskirts of the capital Damascus.

Syria considers the rebels terrorists. Its foreign ministry called the US decision to arm the rebels a “flagrant double standard” in its dealings with terrorism.

Syria’s state news agency SANA said: “the United States affirmed once again its involvement in supporting the armed armed terrorist groups in Syria by announcing its intention to provide them with greater military aid”.

Washington has moved Patriot surface-to-air missiles, war planes and more than 4,000 troops into Jordan in the past week, officially as part of an annual exercise but making clear that the forces deployed could stay on when the war games are over.

Just months ago, Western countries believed Assad’s days were numbered. But momentum on the battlefield has turned in his favour, making the prospect of his swift removal or an end to the bloodshed appear remote without outside intervention.

The use of chemical weapons provides a straightforward reason for Washington to intervene. Deputy National Security Adviser Ben Rhodes said Washington now believed 100-150 people had been killed by poison gas.

“Our intelligence community assesses that the Assad regime has used chemical weapons, including the nerve agent sarin, on a small scale against the opposition multiple times in the last year,” he told reporters.

Syrian rebels already receive light arms from Saudi Arabia and Qatar. They have asked for heavier weapons including anti-tank and anti-aircraft missiles. European countries, in particular France, have argued that the solution is to provide more weapons for mainstream rebels to marginalise extremists.

U.S. and European officials are meeting the commander of a main rebel fighting force, the Free Syrian Army (FSA), on Friday in Turkey. FSA chief Salim Idriss is expected to plead urgently for more help.

Obama has been more cautious than Britain and France, which forced the European Union this month to lift an embargo that had blocked weapons for the rebels. French officials already said a week ago that they had firm proof Assad used nerve gas, while Washington continued to say it was unsure until Thursday. [Reuters]