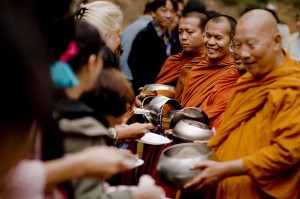 Thailand’s national Buddhism body said on Monday it was monitoring monks nationwide for any inappropriate behaviour following complaints ignited by a video showing Buddhist monks on a private jet.

The YouTube video which recently emerged showed one of the monks wearing stylish aviator sunglasses, carrying a brand name travel bag and sporting a pair of modern-looking wireless headphones. These are ‘un-monk-like’, and it has attracted criticism from Buddhists nationwide.

Office of National Buddhism director-general Nopparat Benjawatananun said on Monday that the agency saw the video early this year and had warned the monks from a monastery in Thailand’s northeast not to repeat the lavish behaviour.

In 2007, calls were made by some Thais for Buddhism to be recognized in the new national constitution as a state religion, a call the Constitution Drafting Committee voted against.

Thailand boasts of the world’s largest Buddhist population at 94.6% of the total population, and has attempted to help Buddha’s 2,600-year-old doctrine stand the test of time through a variety of means, including imposing a ban on the sale of alcohol on religious holidays. The efforts, however, are sometimes tainted by the Buddhist monks themselves.

Last year, about 300 out of 61,416 Buddhist monks and novices in Thailand were reprimanded – in several cases removed from the monkhood – because of their misconduct, ranging from alcohol consumption, having s*x with women, to extortion.

The Office also received complaints about monks driving cars, and scams and false claims of black magic uses by monks.

Nopparat said the Buddhist monks in the video were acting “inappropriately, not composed and not adhering to Buddha’s teachings of simplicity and self-restraint”.
http://www.youtube.com/watch?v=dK3pE7_BxOc&feature=player_embedded