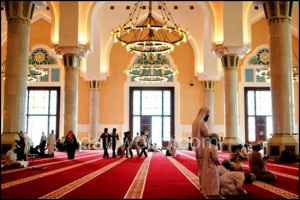 Qatar’s largest mosque has announced that it will ban children under the age of seven at Isha (evening prayers) and Taraweeh prayers (the last evening prayer).

“We are sorry to make this decision, but we have received several complaints from worshippers about the disturbance caused by young children,” Shaikh Malallah Bin Abdul Rahman Al Jaber, the Mosque Directorate in charge of the Imam Mohammad Bin Abdul Wahab Mosque in Doha, said.

“We are forced to impose the ban both at the men’s prayer hall and at the women’s prayer hall, to ensure that worshippers are not annoyed by the brouhaha of underage children. We urge all parents to comply with the new rule,” the Qatari daily Al Sharq reported him as saying on Sunday.

Mosques are meant to be for worshipping God and must not be turned into anything else, he said. Worshippers have complained that the large halls have been turned into playgrounds or nurseries for children.

“We have a full set of rules on how people should behave inside the mosque and we have urged all worshippers to respect the place by following the rules as there should be full serenity,” Al Jaber said. “All those who come into the mosque must make sure their mobiles are switched off and that they place their shoes on the shoe racks at the entrance. They must be adequately dressed and their clothes must be clean. No one is allowed to bring in food or beverages and everyone is expected not to disturb other worshippers,” he said.

The mosque security staff will be strict in enforcing the rules to help ensure that worshippers are not disturbed by distracting noises, unconventional attitudes or sights or unpleasant smells.

“The rules and regulations will be applied without exception,” Al Jaber said.

The mosque, named after Imam Mohammad Bin Abdul Wahab, the influential Muslim scholar who lived in the 18th century in today’s Saudi Arabia, can accommodate 10,000 worshippers at a time. It has a total area of about 19,550 square metres on three levels, with an area of 175,000 square metres and incorporates traditional Islamic architectural elements. The striking feature of the mosque in the Khuwair area of Doha, is more than two dozen big domes and as many small domes making up the upper portion of the structure.

Bin Abdul Wahab’s teachings are dominant in Saudi Arabia and Qatar. In his teachings, he urged Muslims to uphold only “the original principles of Islam as typified by the Salaf” and to reject “corruptions introduced by bidah” (negative innovations and heresy).

The scholar emphasised that there could be no intercession between God and worshippers. According to Bin Abdul Wahab, the “Quran and the Prophet Mohammad’s (PBUH) Sayings are the only fundamental and authoritative texts, while commentaries and examples from the early Muslims are used only to support these texts and cannot be considered independently authoritative.”