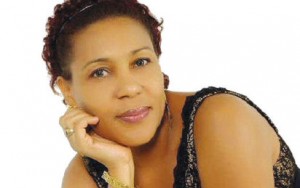 She has been accused of going into marriage and coming out of it over  three times, dating younger men and decorating her body with countless tattoos. What’s true and what’s not?

In this interview, the half caste actress shares her  painful story with Showtime Celebrity. This is Shan George beyond the scandals.

One major challenge I have always faced as an actress has to do with not being at home all the time and playing roles in movies that are opposed to my character.

Let’s assume you were born in a Christian home and you imbibe what you were taught from when you were a kid. All of a sudden, because of your profession, you are called to be a Buddhist or a mermaid. You are talking about being something you have never experienced. I have never seen a mermaid or transformed into a mermaid before, but I’ve acted as one.  You have to try and figure out how they talk, walk, smile and so on.

Another challenge is when you go to the extent of interpreting  whatever role you’re given to play in movies. People who watch the movie tend to associate you with that character.  I’ll never forget an experience I had at Alade market, in Lagos, a few years ago. I went there to buy some things like every other person, but  suddenly, some people started throwing rotten tomatoes at me.

Many others were calling me unprintable names; a loose woman, husband snatcher. All because  I  played such roles in movies. I’m not like that in real life.   I remember I acted a prostitute in the movie, Outcast. After the film was released into the market, I got a call from a guy based in Italy who told me that he just watched the movie, and he thought I was really hot. He said he would want to enjoy  such a gesture like the guys in the movies any time he storms Nigeria.

There are so many other challenges. You are seen playing roles where you are really rich with several big cars and houses at your disposal. People assume you’re like that in real life, but it’s not always true. Everywhere you go, people expect you to settle ‘agberos’ and drop something, but it doesn’t work like that. That is the reason some practitioners tend to spend money they don’t have just to meet the expectations of their fans.

It is really crazy.  A lot of these things are not true. For example, I have two grown up sons. Anytime people see me pose for shots with younger men, they conclude that as old as I am, I like young boys and that’s not true at all.  It is very depressing sometimes. You need the grace of God to hear things about yourself that are not true and still be strong and get going.

How scandals affect her

It happened many years ago when I was still a toddler in the industry. I remember driving some years back and I saw vendors selling a particular magazine with my photograph and a caption that read: “Even Pastors love my boobs.”  That day was so sad for me. I couldn’t even believe that I was the one they were writing about.

On the multiple marriage scandals

There was a time someone called to congratulate me on my new marriage. I was shocked. My first marriage was when I was 16, and I don’t count that because I was a child and I had no say in the matter. The ideal thing is that as an adult, you meet someone you like and you get married to him.  What happens most times is that I act a movie where I get married, the pictures go  viral online and everyone says I am married again.

And I am amazed because I wonder, people who read this, don’t they calculate the years? I married once and my two kids are for my first husband. I read on some blogs that I had a child out of wedlock and I have been hiding it. But  I wonder if I got married at the age of 16, at what age did I have that child?  I was so young when I walked out of my first marriage to pursue my education. Later on, as an adult, I got married again, but we aren’t really together anymore. Marriage can be complicated.

I have someone who is very nice and important to me. So, I guess you can call that a romantic relationship. I have always known this guy and he has  been there for me.

Tattoos are a way for me to express myself. People wear clothes, fix their hair or nails; but for me, I love tattoos, that’s who I am. I have just two permanent tattoos, but sometimes I wear artificial tattoos depending on my mood.