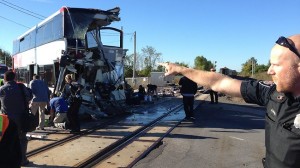 A double-decker bus collided with a passenger train in Canada’s capital Wednesday, ripping off the front of the bus and killing six people.

Witnesses said the bus went through a closed crossing barrier, and passengers said they screamed “Stop, stop!” at the driver just before impact.

Officials said 30 people were injured, 11 critically. The crash in Ottawa occurred at the peak of morning rush hour. The cause was not yet clear, said John Manconi with bus operator OC Transpo.

It was Canada’s second major rail accident this year. It comes just months after an oil train derailed and exploded in a Quebec town in July, killing 47 people.

Tanner Trepaniere, who was on the bus, said passengers could see the train bearing down on them as the bus approached the crossing.

“People started screaming, ‘Stop, stop!’ because they could see the train coming down the track,” said Mr Trepaniere, who was sitting in the upper level.

Witnesses said the bus plowed through a lowered crossing barrier and directly into the side of the passing, four-car train. The locomotive and one passenger car derailed. Via Rail said there were no reports of major injuries to train passengers or crew. Via Rail cancelled trains on its Ottawa-Toronto route.

Officials respond to the scene where a city bus collided with a Via Rail passenger train at a crossing in Ottawa.

Passenger Gregory Mech said the bus was approaching a train crossing where there is about a 90-degree bend. Mr Mech said he didn’t think the driver noticed that signals were flashing and that the barrier was down.

“The bus actually hit the train dead on,” Mr Mech told the Canadian Broadcasting Corp. “I could see that there were bodies on the train tracks. It was horrible.”
Rebbecca Guilbeault, who was on the bus with her 1-year-old son, said she had put him in a stroller just before the crash and said people piled on top of him.

“I don’t know if the bus driver blacked out. He didn’t slow down, and it just impacted with the train,” Ms Guilbeault said. “I’ve seen a few people dead, someone ripped in half.”

Witness, Mark Cogan said the rail barrier was down.

“The train is going through,” Mr Cogan said. “And I was just looking around, just watching things happen. And noticed that in the bus lane, the double-decker bus … I saw him, and he just kept going.

The train tracks in the area, just outside a suburban train station, Fallowfield, cross a major city street and a transit line reserved for buses only.

Canadian Prime Minister Stephen Harper posted a message on Twitter saying he was deeply saddened by the accident and his thoughts and prayers were with the families of those involved.

Transport Canada investigators were on the scene.

The national Transportation Safety Board said Wednesday that there have been 257 accidents involving passenger trains colliding with vehicles at level crossings in Canada over the last decade.

The board said officials have been urging the government for years to do more to prevent this kind of crash.