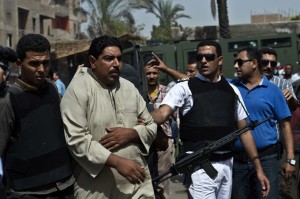 A senior police officer has been killed and nine others injured, while at least 65 people have been arrested, as Egyptian security forces fought gun battles in a town near Cairo after launching an operation targeting “terrorist elements”, the Interior Ministry has said.

A joint police and army operation to take the back from groups loyal to deposed President Mohamed Morsi began at about 5:30am local time (03:30 GMT) on Thursday.
Security troops launched the operation to arrest people accused of torching police stations and killing about 11 security officers in clashes that erupted following the army’s overthrow of Morsi in July.

General Nabil Farrag had just given a pep talk to his men on the street, preparing them to roll into Kerdasah, when they came under gunfire, according to an Associated Press video journalist and a photographer working with AP.

Army soldiers and policemen took cover behind armoured vehicles and behind walls.

However, Farrag fell with a bullet wound getting past the body armour he was wearing.

He lay in the street for nearly 15 minutes, blood soaking through his white uniform, until his men could reach him and carry him into a sedan to take to a hospital.

The Interior Ministry, which is in charge of the police, later announced Farrag’s death.

According to Egyptian state TV, one of those arrested on Thursday was Ahmad Uways, the man accused of killing the head of Kerdasah police station on August 14.

It said police forces took control of the area and imposed a curfew.

Security forces had not been allowed in Kerdasah since then, but authorities had previously promised to respond to the deadly attack on the police station.

Kerdasah, known for producing and selling fabrics, is 14km from Cairo and known to be an Islamist stronghold.

Residents of the area said on Wednesday they were not in control of the area but do not want any police presence there.

At least 1,000 people have died in the violence with most deaths coming during the security forces’ dispersal of two pro-Morsi sit-ins in Cairo on August 14.

About 100 police officers also died in the clashes.