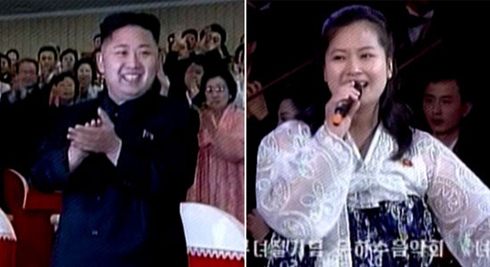 On August 8th, North Korean leader Kim Jong-un was in the audience to applaud his ex-girlfriend Hyon Song- wol (right), a singer with the Unhasu National Orchestra. 9 days later a group of artists were arrested for allegedly making a séx tape. His ex was one of them. They were publicly executed by firing squad on August 20th, while their families were condemned to a labor camp.From Asia News

The North Korean dictator Kim Jong-un ordered the public execution of his ex-girlfriend Hyon Song- wol, accused of ‘pornography’ with a group of artists from the National Orchestra of Unhasu, which his current wife Ri Sol -ju also once belonged to. The arrest took place on August 17, the execution took place in public three days later. According to the indictment the women filmed themselves having séx and then sold the videos in China. Some South Korean sources claim that there were many Christians among those sentenced to death who had a Bible at home, a “crime” that you can pay for with your life or imprisonment in a state gulag in North Korea.

Those shot to death include Mun Kyong -jin, director of the Unhasu orchestra, some singers and dancers of Wangjaesan Light Music Band and some army musicians. All family members of the women involved were sentenced to forced labor. According to the Juche ( the delusional state doctrine conceived by the ” father of the nation ” Kim Il -sung ) is not enough to punish those guilty of a crime, but it is necessary to eradicate the evil ” for three generations . ” Every year, on the basis of this principle, thousands of children are born in labor camps and live there until their death.

The “Young Marshal ” Kim Jong-un , the third son and heir of the “dear leader” Kim Jong -il, met Hyon about ten years ago . After a brief “official” relationship, the engagement was broken by the father of the dictator and the singer was given in marriage to a military man, while the “third Kim ” met ​​his present wife . According to various sources, the two have continued to see each other even after their marriages. The public execution is thus seen as a victory of the “Companion” Ri, who gave two sons to the current dictator and wants to ensure their survival in one of the most cruel dynasties in today’s world.

On 8 August, the dictator took part in a concert performed by the now decimated orchestra. The execution is viewed by some analysts as a sign of affirmation of his power: ” Kim Jong-un is cruelly eliminating anyone who might be a threat to his rule, anyone who can defy authority. Public executions are silencing anyone who even thinks of undermining him . ”