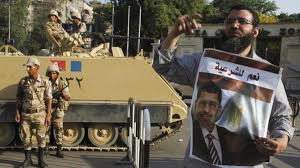 Protest marches staged by supporters of deposed President Mohamed Morsi of the Muslim Brotherhood ended in clashes, Friday, in Cairo and several other Egyptian cities.

An Egyptian army vehicle fired live rounds in the direction of Muslim Brotherhood supporters in the capital, killing at least one protester, Egypt’s health ministry said. Another 14 people were wounded in several protests across the country.

Troops blocked Tahrir Square with tanks and barbed wire as protesters chanted “down down with the murderer” – a reference to army chief General Abdel-Fatah el-Sissi, who forced Morsi out of power after millions took to the streets in the summer demanding he step down.

An Associated Press news agency reporter saw protesters chased by other Egyptians armed with sticks and bottles, before the two sides started hurling stones near the Egyptian museum, located at one of the main entrances of Tahrir Square.

“We will go protest and take all streets possible,” said Mohammed Said, 45, during a march from the Dokki neighbourhood to Tahrir. “We will get in Tahrir at any price.”

Another rally ended at a Defence Ministry building and a second at Rabaa el-Adawiyah mosque in eastern Cairo, where a pro-Morsi protest camp was violently dismantled on August 14.

Troops backed with armoured vehicles increased security around the mosque, where protesters chanted slogans against the military.

Similar clashes also broke out across the country, with police firing tear gas and gunshots in the air as residents and protesters clashed and threw stones at each other.

Egypt’s Muslim Brotherhood group, from which Morsi hails, is escalating protests to coincide with commemorations of Egypt’s October 6 opening strike in the 1973 war with Israel.

Early Friday, masked gunmen fired at a military vehicle near the Egyptian city of Ismailiya, killing two soldiers and wounding an officer and another soldier, a security official said.

The attack took place on the desert road between Cairo and Ismailiya when the assailants in a car without number plates opened fire, said the official.

There have been regular attacks on police and military personnel in the Suez City area, especially since the military toppled President Mohamed Morsi on July 3.

More than 100 policemen have been killed in attacks and clashes since Morsi’s removal.