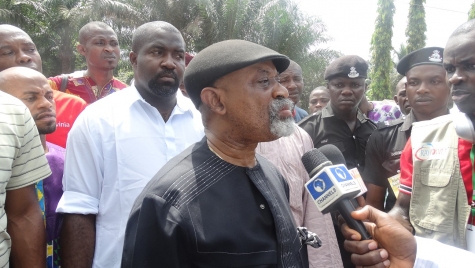 First results of the 2013 Anambra Governorship Election just came in:

The story continues below

Meanwhile, reports reaching us indicate that two people have been shot in Amaenyi, Awka South Local Government Area. They were allegedly attempting to steal ballot boxes. We’ll post the updates as soon as we get them.

In a related development, the All Progressives Congress (APC) has warned they will not accept the results of the ongoing governorship election in Anambra state unless the voting takes place in all local governments. Namely, in the APC’s strongholds of Idemili North and South, as well as in Akwa South.

The party, in a statement by its Interim National Publicity Secretary, Alhaji Lai Mohammed, also accused the INEC for its apparently contrived “logistic nightmare”. Thousands of voters were left unable to exercise their franchise, the party said, and demanded the immediate removal of the Resident Electoral Commissioner for Anambra, Prof. Chukwuemeka Onukogu.

APC said it was totally astonished to learn that INEC has confirmed that materials meant for Idemili North Local Government, which has 180,000 voters, have been hijacked, without saying who hijacked the ballot papers and why, and without explaining why the materials meant for APGA and PDP strongholds were not hijacked.

The party said equally astonishing is the fact that the voter’s registers for Idemili South, the direct council of the APC candidate, Dr. Chris Ngige, did not contain the names of voters in the local government, despite the assurances by INEC Chairman Attahiru Jega.