English football legend, David Beckham, and his 14-year-old son, Brooklyn, were unhurt following an auto accident outside his Beverly home in the United States. 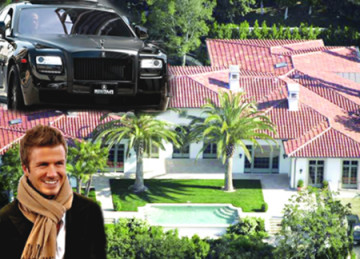 The Beckams who were in a black Range Rover Sport, reportedly crashed into another car as they pulled out of their home, according to the Daily Mail. The ex-England football captain was the one driving while Brooklyn was in the front passenger seat when the collision occurred at 2.30pm last Friday.

Onlookers said Beckam, 38, pulled out of his driveway and hit an oncoming car being driven by a woman.

He reportedly reversed into his drive way and waited within his residence before police arrived to question him about the incident.

Police were seen leaving his home, then interviewing witnesses nearby for more information about the accident.

Damage was clearly visible on the white Acura 4×4, as well as Beckham’s expensive Range Rover Sport, which had its bumper hanging off the front.

It’s not the first time David and Brooklyn have been in a car crash together.

Back in 2011, the two had a ‘lucky escape’ when their vehicle was involved in a multiple-car pile-up on one of the busiest freeways in Los Angeles.

Both wearing seat belts at the time, Beckham and his son were left unhurt in the rush hour collision.

Beckham was at the wheel of his luxury black Cadillac Escalade when it became the third car in the pile-up.

Also earlier this year, his wife, Victoria, had her bike stolen in New York.

Earlier in October 2013, Beckham and Victoria sold their Beckingham Palace country home and a fleet of cars for $19m to upgrade to a $70m home in London. According to the Sun On Sunday, the Beckhams’ decision to sell up was down to ‘the beginning of a new era for the family.’

The couple, who bought the mansion for about $4m after their wedding 14 years ago, raised their three eldest children in the estate surrounded by sprawling land and gardens.

Brooklyn, Romeo, 11 and Cruz, 8, all had the chance to call the 12-acre property their first home, before the family moved to Madrid and then Los Angeles, following Beckham’s football career.