Mr Solomon Awoniyi, father of Golden Eaglets’ striker, Taiwo Awoniyi, said he used to beat his son to discourage him from playing football. 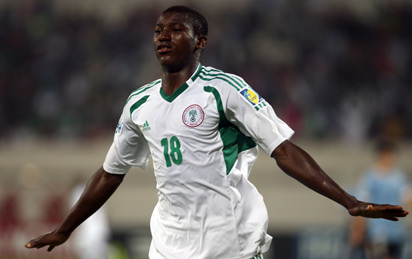 Awoniyi on Sunday at his Gbagba residence, Ilorin, said that he never knew Taiwo would play football to global level.

He said the football career of his son started during his elementary school days, noting that he (Taiwo) would always disappear from the house to play football and the whole family would be looking for him.

Awoniyi praised the efforts of Taiwo’s coach, Rasaq Olojo, whom he said discovered and nurtured him.

He said the striker was part of the team that participated in a Coca Cola competition in Ibadan, which later earned him a trip to London in 2010, where former Nigerian football stars Nduka Ugbade and Seyi Olofinjana, spotted him.

He disclosed that Taiwo Awoniyi was voted the most valuable player and came home with the award from London in 2010.

Awoniyi, a retired Police Officer, said he was happy to watch his son represent Nigeria in a world tournament.