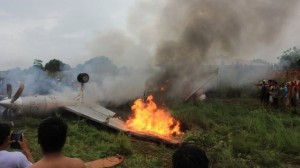 Eight passengers were killed when an aircraft carrying 18 people crashed while trying to land during bad weather in the north of Bolivia, injuring the others on board.

Heavy rain was falling as the small turboprop plane operated by local airline Aerocon tried to land in Riberalta, near the Brazilian border, according to witnesses.

Aerocon spokesman Nelson Kinn said that the plane had technical issues that led to the plane catching fire on landing.

“As they were landing, on touchdown, the plane had some kind of problem that led to fire. The people who died sustained multiple injuries and burns,” Kinn told AFP news agency.

“[There were] 16 passengers and the pilot and co-pilot, of whom 10 survived and 8 died,” director of the Riberalta hospital, Jose Luis Pereira, told the Reuters news agency.

“The pilot and the co-pilot are in the gravest situation … Seven [bodies] are [so] charred, we can’t identify them.”

President of Bolivia, Evo Morales said he had ordered “a deep investigation” into the accident and “drastic sanctions on the company”.