The Senate President David Mark urged both the Federal Government and the Academic Staff Union of Universities (ASUU) to respect the agreement that culminated in the suspension of the six months old industrial action in order to avoid a repeat of the unfortunate saga in future. 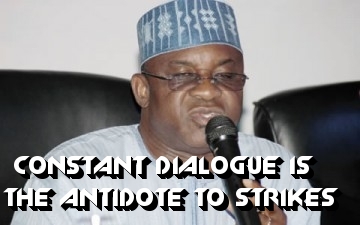 David Mark stated this on December 19, 2013, Thursday, as he met ASUU President Dr. Nasir Isa Fagge, his Vice, Prof. Biodun Ogunyemi, and his predecessors Dipo Fashina and Dr. Abdullahi Sule-Kano at his office in Abuja.

He advised that the N200billion education fund lodged with the Central Bank of Nigeria for the purpose of addressing the ills in the universities should be used judiciously to curb the defects.

David Mark called them to do all that is required to return education to its former glory.

The Senate President restated that education remains the bedrock of any nation that must not be compromised or toiled with:

“Education is the foundation of any development. No nation toils with the education of its citizens. We must make our education strong and functional. We must strive to lay a solid foundation for our future.”

David Mark also sympathized with ASUU on the death of its former President, Prof. Festus Iyayi, and canvassed for a qualitative education as a mark of respect for the late Iyayi.

He also noted that wide consultation and dialogue remains the best approach to any disagreement.

In his return, Dr. Fagge thanked the Senate for the mediation that led to the end of the strike.