Home News Feed PDP’s Wahala Is Not The Problem Of One Man, The Party Is...
Facebook
Twitter
WhatsApp

Former Vice-President, Alhaji Atiku Abubakar, recently defected from the ruling Peoples Democratic Party, of which he is one of the founders, to the opposition, All Progressives Congress. 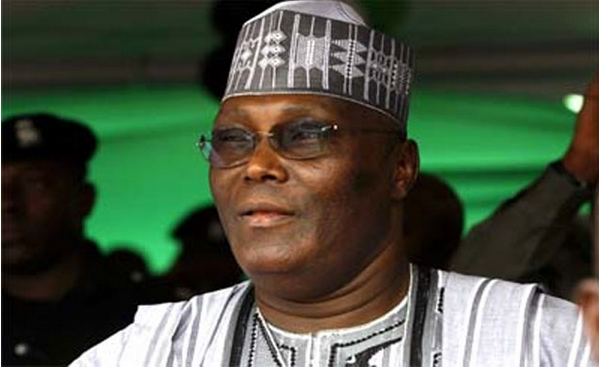 In an interview with LEKE BAIYEWU, he speaks on politics and PDP.

Why did you leave the PDP, despite the resignation of the former National Chairman, Bamanga Tukur, who you were aggrieved with?

Bamanga Tukur is my kinsman. I have no grievances against him. The problem of the PDP was not caused by Tukur. Lack of internal democracy is at the centre of the crisis bedeviling the PDP. It is a cancer that is spreading rapidly and destroying the fabric of the party. Despite all efforts and political chemotherapy, the party has continued to show debilitating signs.

Don’t you think Adamu Mu’azu’s emergence as Tukur’s successor will solve the problems in the PDP?

I have said this in an earlier interview: PDP’s wahala (trouble) is not a problem of one man nominated or elected chairman can solve, when anti-democratic forces masquerading as leaders and godfathers continue to loom large over and above the powers and authority of the chairman of the party. The party has in its leadership structure a value defect, which pulls it down despite efforts made by few democratic characters within its fold to lift the party. Impunity has become a way of life in the party and some of us don’t fit in anymore. If our country must make progress, then we need to chart a new way forward. And as things stand, I do not see the PDP being able to provide the leadership in this direction.

Is your grievance really about the PDP or the leadership of President Goodluck Jonathan?

My grievance is about the leadership values predominant in the PDP, which promotes anti-democratic forces in the affairs of the ruling party and these negative influences rub off on the conduct of national affairs. This is why our country is lagging behind in the comity of nations in democratic development, eradication of poverty and job creation for our teeming, unemployed youths. This impunity now rears its ugly head in every facet of our national life. It is manifest in how we resolve political problems, how we run our universities and how we recruit people for leadership positions. The leadership of our country is not fair to the Nigerian people.

Former President Olusegun Obasanjo, who was widely seen as a threat to your political career in the PDP, is having similar complaints with you. Who are those disrupting the peace in the party, as you’ve said the crisis is leadership-induced?

I don’t want to continue discussing PDP’s crisis at this point of my political career and Nigeria’s socio-economic challenges. I have ported! I want to concern myself with and channel my creative energies to solving problems and challenges facing our country as a whole. I have many children and grandchildren, who are looking forward to a greater and prosperous Nigeria. I want to dedicate the rest of my life and resources to pursuing the greater good of my country and its people, by ensuring that a new political leadership emerges in Nigeria to revive the economy, give jobs to the youth and provide security to every citizen.

What is the fate of the New PDP at this point?

It has coalesced into the APC.