The National Conference began on Monday, March 17, at the National Judiciary Institute in Abuja. 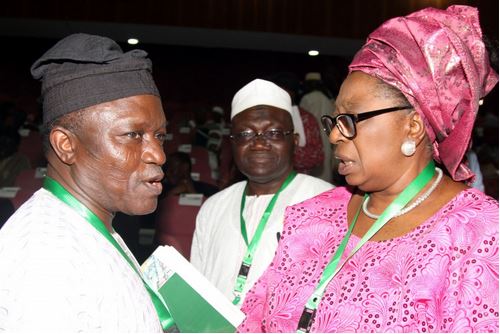 The confab that will last for three months and cost around N7bn ($42mln) is meant to provide a platform for Nigerians to discuss issues of common concern.

These issues that are likely to be at the top of the agenda are Islamist-linked violence in the north, corruption, a more fair distribution of oil wealth, and the effectiveness of the country’s political structure.

A visibly angry delegate, Naseer Kura (left) being calmed down by the President , Market Women Association of Nigeria, Felecia Sani during a debate on the voting pattern of the resolutions of the conference in Abuja yesterday

One of the delegates taking a nap during yesterday’s session. You should remember that the delegates Of National Conference get paid N1.45 million after sitting for one week.

Chief Niyi Olaniwun(left) Chief Ayo Adebanjo and others during session