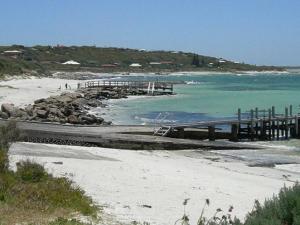 The debris was discovered on a beach 10km east of Augusta and was reported to police.

Authorities say the 2m x 2m item is now at Bussellton police station where it has been photographed.

Australian Transport Safety Bureau Chief Commissioner Martin Dolan said it appeared to be a piece of sheet metal with rivets.

Although Mr Dolan said the debris was “sufficiently interesting for us to take a look at the photographs”, he added that “the more we look at it, the less excited we get”, CNN reported.

The Australian-led Joint Agency Coordination Centre said the photos were being examined “to determine whether further physical analysis is required and if there is any relevance to the search for missing flight MH370”.

However, Malaysian officials appeared puzzled by suggestions any part of the plane could possibly have been found on a WA beach.

Azharuddin Abdul Rahman, the head of Malaysia’s Civil Aviation Department, said the debris had “not been verified yet as a part of the aircraft”.

The debris was found by an unidentified man who told local farmers about it before reporting it to police.

Australia’s Nine News earlier reported that three objects had washed up, one believed to be the length of a car with “distinct rivets”.

The latest find came as Prime Minister Tony Abbott insisted Australia won’t be abandoning the search even if no wreckage was located during the underwater hunt.

“Australia will not rest until we have done everything we humanely can to get to the bottom of this mystery,” Mr Abbott insisted.

The hunt for the jet has focused on a search area about 1500km north west of Perth after pings believed to be from the plane’s black boxes were detected there.

So far nothing has been found and the air search was suspended yesterday for the second day in a row due to heavy seas and poor visibility.

The Prime Minister said he had “no advice whatsoever” to suggest there is any truth in claims the plane may have landed somewhere.

His words came in response to a report in the New Straits Times quoting sources close to the investigation saying that they were considering revisiting the scenario that the plane had landed at an unknown location.

“Our expert advice is that the aircraft went down somewhere in the Indian Ocean, we have identified a probable impact zone, which is about 700km long, about 80km wide,” Mr Abbott told reporters in Canberra.