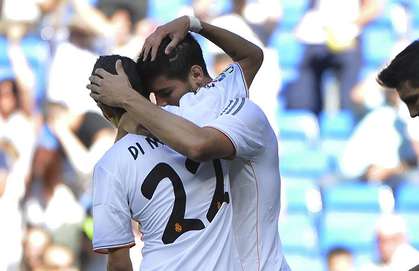 The strange situation involving Carlos Vela, Arsenal and Real Sociedad has got yet more stranger as Real Madrid became involved with the transfer tussle.

Arsenal find themselves in the curious position of being able to sign Vela for just €4m, which represents a significant bargain, but neither the player or Arsene Wenger seem keen on the reunion.

Spanish newspaper Sport claim that Vela doesn’t want to go back to Arsenal while Wenger would rather sign his Real Sociedad teammate Antoine Griezmann.

In the striker department, Wenger is also believed to be very keen on Real Madrid’s Alvaro Morata, which is where the Arsenal manager could use the Vela
buy-back clause to his advantage.

Real Madrid have been in contact with Real Sociedad with regards to Asier Illarramendi, who they are keen to offload after being left less than impressed with the player’s attitude.

The player cost Los Blancos €40m last summer but they are hoping to get some sort of refund, possibly in the shape of Griezmann himself.

Another potential situation would see Arsenal buy Vela for €4m only to immediately offer the Mexican to Real Madrid in exchange for Morata.

That would see Arsenal get Morata for a much cheaper price and may also see Illarramendi go back to Real Sociedad, although that’s where this nonsensical situation ventures to another level of
complicated.{GMS}