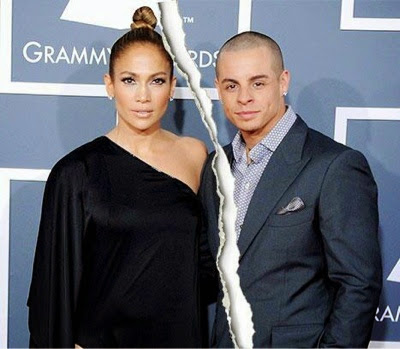 After weeks of breakup rumors, an ET source confirms that Jennifer Lopez has split from Casper Smart.
After two and a half years of dating, the source says the couple called it quits a while back. Following her breakup news, the 44-year-old American Idol judge is scheduled to hit up the World Cup in Rio de Janeiro, Brazil to perform We Are One (Ole Ola) with Pitbull.
Lopez was first romantically linked with the 27-year-old backup dancer in November 2011, just four months after her split from her third ex-husband Marc Anthony. She and Anthony have two twins, Max and Emme, age 6. Prior to Smart and Anthony, she was married to Cris Judd and Ojani Noa. She was also engaged to Ben Affleck
Back in Jan. 2013, Lopez spoke about her relationship with Smart to Harper’s Bazaar, saying, “I can tell him everything, when I’m feeling down, when I’m feeling good. He gives moral support, endless love and support.”
The couple’s breakup confirmation comes after numerous rumors that Smart cheated on Lopez with a transgender model he met online. Neither Smart nor Lopez have commented on the reports.