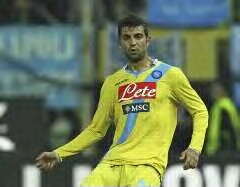 Raul Albiol believes his decision to leave Real Madrid for Napoli last summer has been fully vindicated by his increased game time.

The Spain international enjoyed a successful first season at the San Paolo, helping the Partenopei claim both a Champions League place and the Coppa Italia.

Consequently, he does not regret his decision to leave the Santiago Bernabeu, explaining that he has been made to feel more wanted by Napoli coach Rafael Benitez than Blancos boss Carlo Ancelotti, who took charge in the Spanish capital a month before he left for Italy.

“I took this decision a year ago in order to player more games than I did at Madrid,” the defender told Tuttosport.

“And it was the correct choice, given the trust I’ve had from the coach and my team-mates from the very first day.

“Now, I need only to improve.”

Albiol also dismissed the suggestion that he has thrived in Italy because Serie A is of a lower standard that La Liga.

“I have not noticed a great difference between Italian football and Spanish football,” he insisted.

For now, the centre-half is solely focused on helping Napoli win the league for the first time since 1990.

“For the moment, we want to win our Champions League qualifier,” he mused. “It’s a fundamental objective for our season.

“But this year we weant to go for the Scudetto. It will not be easy and nobody can say they’re going to win it even before a game is played.

“We will have to work hard and suffer, to correct the errors we made last season, but we are a good team and we must aim high.

“It will be a long season and we must give our all every week in order to always be close to top spot. But all of us at Napoli want to give the fans another Scudetto.” {GOAL}